Pima County voters will decide in November election whether to approve a $22M bond to upgrade facility. by Andrea Kelly TWEET SHARE 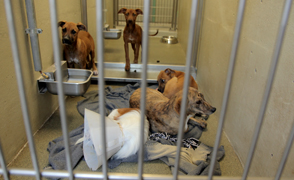 Pima County voters are deciding whether to raise their property taxes to expand the animal care center.

The Pima Animal Care Center takes in stray or unwanted animals, and promotes adoption. It was built in the 1960s, and has had no permanent upgrades since.

The county has a policy to save as many animals from being euthanized as possible, and that has led to overcrowding. So, the county wants voters to approve a $22 million upgrade to the facility to improve conditions and fund an expansion.

A property tax increase would pay for the work, and it would come to about $5 a year for every $100,000 of assessed value for a residential property.

Neal Cash, president and CEO of the Community Partnership of Southern Arizona, the regional behavioral health agency, said people should vote for the measure because animals help with therapy.

“It’s not a big reach, I can tell you that, between supporting this initiative and the work that we do in the mental health system," Cash said.

In the voter-education pamphlet, 41 people or groups supported the proposal, and no one wrote in opposition. There is an opposition committee, called Stop Prop 415.

Attempts to reach the committee by phone and email were unsuccessful.

For more coverage of the 2014 Elections,
please click here.

2014 Arizona Ballot Questions: What Do They Mean? Voters to Decide Use of Trial Drugs on Terminally Ill Pima Animal Care Center Seeking Expansion
By posting comments, you agree to our
AZPM encourages comments, but comments that contain profanity, unrelated information, threats, libel, defamatory statements, obscenities, pornography or that violate the law are not allowed. Comments that promote commercial products or services are not allowed. Comments in violation of this policy will be removed. Continued posting of comments that violate this policy will result in the commenter being banned from the site.