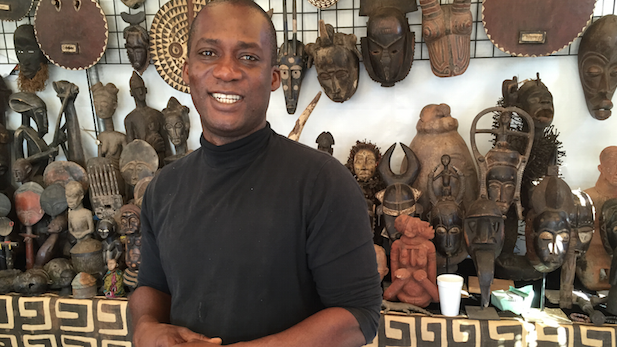 Sorakata Sylla comes from Ghana each year for the Gem and Mineral shows.
Vanessa Barchfield, AZPM

The African Art Village is a decades-old mainstay of the Tucson Gem, Mineral and Fossil shows each February.

Sorakata Sylla has made the annual trip from his home in Accra, Ghana, for the past 23 years to sell his wares at the show, at Interstate 10 and Starr Pass Road.

Carved masks and strings of beads hang inside his tent, which he calls A Touch of Africa. He also carries clothing, hats, drums and carved furniture from west and central Africa.

Sylla said the musical instruments are probably his most popular items, and other big sellers are beads, which range in price from tens of dollars to thousands. His Venetian beads, priced at $8,000 a strand, were made in Italy 400 years ago, and traded into West Africa, "for gold, slaves, anything they could get their hands on," Sylla said.

The Tucson show is important for Sylla's business – and it’s not just the sales he makes during the two weeks. The show will fuel orders throughout the year, after he packs up and heads back to his family.

Tucson's Winter Visitor Season Peaks with Gem Shows Tucson's African Community Celebrates Black History Tucson Gem Show: 'Big Rush of Color, Brightness, Sparkling'
By posting comments, you agree to our
AZPM encourages comments, but comments that contain profanity, unrelated information, threats, libel, defamatory statements, obscenities, pornography or that violate the law are not allowed. Comments that promote commercial products or services are not allowed. Comments in violation of this policy will be removed. Continued posting of comments that violate this policy will result in the commenter being banned from the site.