Watch the video of THE EAST TOWER, originally aired on ARIZONA ILLUSTRATED:

Work to restore the structural integrity of the Mission San Xavier del Bac has been going on for decades. Efforts during the 1950’s and 60’s involved, among other things, the use of cement and rubberized roofing paint, which failed.

Bob Vint has been the Preservation Architect at San Xavier del Bac for the past 25 years. He has seen the damage caused by the hard coat of cement applied in previous restoration efforts.

"The head of our masonry crew, Danny Morales, I’ve been with him when he’ll open up a piece of wall with a hammer and chisel and just a spurt of red dust will come out, because the brick has disintegrated," Vint said.

"One thing we’ve learned is you need to use ancient materials for ancient buildings, you can’t use modern materials, they end up doing more harm than good."

Listen to a radio adaptation as heard on Arizona Spotlight:

The folkloric ingredient, Nopal Cactus mucilage is one of those ancient materials that is being added to the traditional plaster of lime and sand.

"Essentially, it is a fluidifier, it makes the mortar handle better when the masons are putting it on the wall," Vint said. "I believe what it does is it slows the drying time of the lime plaster, if it drys to quickly it doesn't fully cure. I've visited other lime projects around the southwest that have failed, because the lime didn't cure and it fell off the wall. I think cactus glue helps us with that, it's very widely practiced throughout Mexico.” 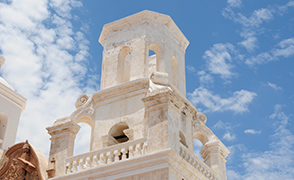 The east tower at San Xavier Mission. Restoration efforts are being funded through The White Dove Campaign.
Mitchell Riley

Restoration of the west tower was completed in December 2008. Now, plans are focusing on the east tower.

For the past two decades funding for work at the Mission has come from donations to Patronato San Xavier, a non-sectarian non-profit organization founded by Southern Arizona community leaders. Their mission is promote the preservation and restoration of Mission San Xavier del Bac. 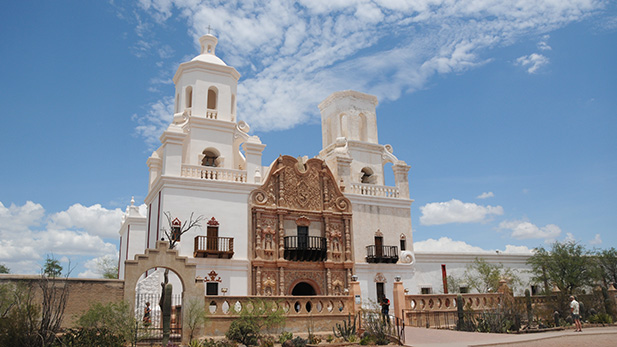 Preservation Group Picks Mission San Xavier for Grant Program Group Seeks Funding to Restore San Xavier East Tower Tucson International Airport getting $18.5M federal grant
By posting comments, you agree to our
AZPM encourages comments, but comments that contain profanity, unrelated information, threats, libel, defamatory statements, obscenities, pornography or that violate the law are not allowed. Comments that promote commercial products or services are not allowed. Comments in violation of this policy will be removed. Continued posting of comments that violate this policy will result in the commenter being banned from the site.