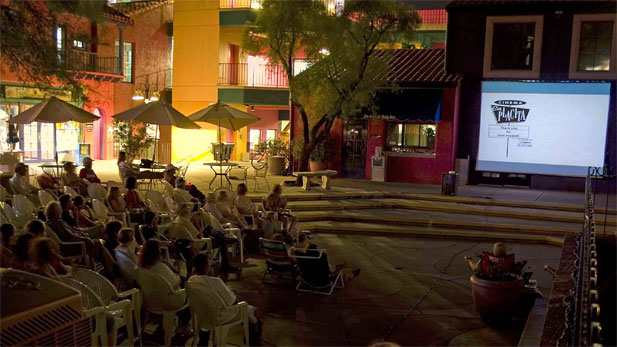 Tenants of downtown Tucson's La Placita Village received notice this week that they must move out by July 31 to make way for demolition and redevelopment of the property, possibly as an apartment complex.

HSL Properties of Tucson, which owns the iconic, colorful collection of buildings, sent a letter to tenants, saying, " ... we are issuing notices of non renewal of lease, and we are asking our tenants to fully vacate their leased space by July 31, 2016."

Redevelopment plans for the property, tucked into the northeast corner of the Tucson Convention Center complex, were announced months ago, but not timeline was revealed.

Several apartment complexes are under construction or planned in the vicinity of La Placita, as part of the revival of the city's core that began in earnest several years ago.

HSL officials, in their letter to tenants, were vague about their plans.

"The reality is that we do not yet have a firm plan or timeline for redevelopment," the letter said. "In fact, there is a possibility that the redevelopment project might not proceed at all."

La Placita was built in the early 1970s and never grew to be the commercial and office center that was envisioned when it was planned. The complex includes an estimated 200,000 square feet of space and a three-story parking garage.

La Placita has undergone several ownership changes and took on its bright colors about a decade ago. HSL acquired it through foreclosure in 2011.

HSL owns numerous apartment complexes around Tucson, and it owns the closed Hotel Arizona, a 12-story building just west of La Placita. HSL officials have said they would work on redevelopment of La Placita before coming up with plans for the Hotel Arizona property.

Demolition Starts on Downtown Tucson's La Placita Outdoor Film Series Moves to Tucson Museum of Art The Next Step to Revitalize Downtown Tucson
By posting comments, you agree to our
AZPM encourages comments, but comments that contain profanity, unrelated information, threats, libel, defamatory statements, obscenities, pornography or that violate the law are not allowed. Comments that promote commercial products or services are not allowed. Comments in violation of this policy will be removed. Continued posting of comments that violate this policy will result in the commenter being banned from the site.