A conversation with the acclaimed documentarian reveals some of the reasons why he found the story of "Prohibition" so compelling. by Mark McLemore TWEET SHARE 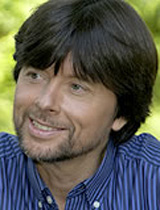 Not many documentary film makers ever become household names, but Ken Burns is perhaps the most widely-known of our generation.

Even before The Civil War aired in 1990, Ken Burns had been making films about some of the most moving and transformative stories in American history.

His latest project is Prohibition, a three-part series debuting October 2nd on PBS stations around the country, including PBS-HD Channel 6. It looks at a remarkable phase in the 20th century, when the American people were sold on the idea of legislating a new morality. But, the impact that the 18th amendment to the constitution had on America would be far more staggering than the strongest drink.

(Mark McLemore spoke to Ken Burns by telephone, and the call had some audio interference.)

The first installment of the Prohibition premiers on Sunday, October 2nd at 8 pm on PBS-HD Channel 6.

Arizona Public Media will also add a local focus to the Prohibition story with The Dry Run: Prohibition in Arizona, produced by Tom Kleespie. It airs on Thursday, September 29th at 6:30 p.m. as a part of Arizona Illustrated.

Rogue Radio presents Kate Chopin's “Désirée's Baby” Composer Steve Roach believes "The music is the medicine". What living in a world made from chemicals means for "The Sensitives".
By posting comments, you agree to our
AZPM encourages comments, but comments that contain profanity, unrelated information, threats, libel, defamatory statements, obscenities, pornography or that violate the law are not allowed. Comments that promote commercial products or services are not allowed. Comments in violation of this policy will be removed. Continued posting of comments that violate this policy will result in the commenter being banned from the site.