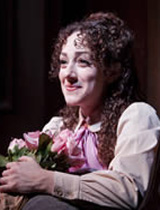 Arizona Theater Company's newest production, Daddy Long Legs, has many factors that make it unique. It's a musical love story which stars only two actors. The story is told through a series of letters between Jerusha Abbott, the oldest orphan at the John Greer Home, and Jervis Pendleton, her mysterious benefactor, whom she calls Daddy Long Legs. 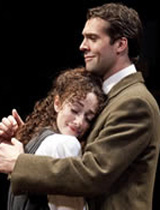 To find out more of what the show is about, Mark McLemore went to the Temple of Music & Art to visit with young star Megan McGinnis on the set, just before a preview performance was about to begin.

Megan has been acting since the age of 5, when her mother suggested it might be a good way for her to overcome her acute shyness. Her first role was that same year, in a production of The King & I, and she has been treading the boards ever since.

The Arizona Theater Company presents Daddy Long Legs onstage at the Temple of Music and Art through December 21st. The production then moves to Phoenix for a run starting on December 29th.

Arizona Theater Company is an underwriter of Arizona Public Media.

Getting "Anti-Social" with author Andrew Marantz. Arizona Spotlight Special: Arizona Addicted Penetrating the darkness of "The Long Shadow".
By posting comments, you agree to our
AZPM encourages comments, but comments that contain profanity, unrelated information, threats, libel, defamatory statements, obscenities, pornography or that violate the law are not allowed. Comments that promote commercial products or services are not allowed. Comments in violation of this policy will be removed. Continued posting of comments that violate this policy will result in the commenter being banned from the site.