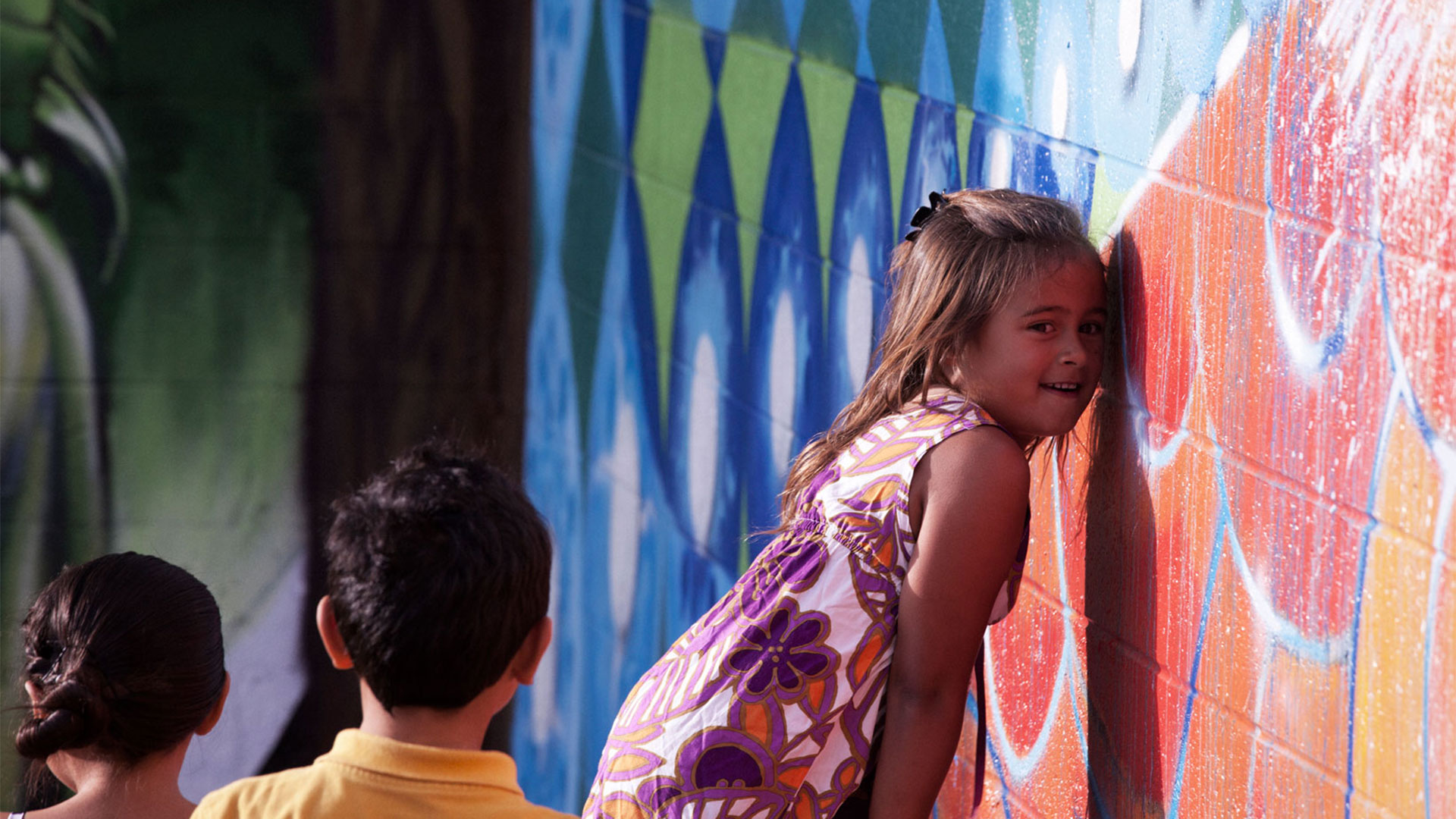 "Mele Murals" is about the transformative power of art through the unlikely union of graffiti and ancient Hawaiian culture.
Photo credit: Evan Loney

Throughout the month of May, Arizona Public Media celebrates Asian Pacific American Heritage by featuring an extensive lineup of special programming. PBS 6 and READY/WORLD offer viewers the opportunity to explore the vibrant history as well as the political, scientific, social and cultural contributions of Asian and Pacific Americans.

Pacific Heartbeat - Visions in the Dark: The Life of Pinky Thompson
(READY/WORLD: Monday, May 1st at 6pm)
A Hawaiian story of pain and promise, of challenge and triumph and a story of leadership. Sustaining a serious eye wound in Normandy during WWII that left him in the dark for two years, Myron "Pinky" Thompson emerged with a clear vision of his purpose in life.

Stories in Thread
(READY/WORLD: Tuesday, May 2nd at 730pm)
Hand-made Hmong Pa Dau or Story Cloths are integral to what it means to be Hmong in America.

Cruising the Three Gorges
(READY/WORLD: Wednesday, May 3rd at 12pm)
Follow two American travelers, Audrey and Paul, as they cruise the Three Gorges and visit scenic spots along the Yangtze River in China.

Pacific Heartbeat: Mele Murals
(PBS 6: Sunday, May 7th at 2pm)
Explore the transformative power of art through the union of graffiti and ancient Hawaiian culture.

Pacific Heartbeat: Ever the Land
(READY/WORLD: Monday, May 8th at 6pm)
Ever The Land explores the sublime bond between people and their land. For the past 150 years, longstanding grievances over extreme colonization tactics have defined the Ngai (tribe) Tuhoe and New Zealand government’s relationship.

Rudy Maxa’s World: The Taste of Japan
(READY/WORLD: Wednesday, May 10th at 12pm)
Amazing food and an in-depth look at the places in Japan that many visitors miss are show cased.

Pacific Heartbeat: Next Goal Wins
(READY/WORLD: Monday, May 15th at 6pm)
In 2001, the tiny Pacific island of American Samoa suffered a world record 31-0 defeat at the hands of Australia, garnering headlines across the world as the worst football team on the planet. Next Goal Wins is an inspirational story about the power of hope in the face of seemingly insurmountable odds, and an object lesson in what it really means to be a winner in life.

Epic Adventures: Hong Kong
(READY/WORLD: Wednesday, May 17th at 12pm)
Hong Kong, Asia's World City, offers a universe of things to do and places to see. Host Danielle DiLorenzo tries to capture all that Hong Kong is in this Epic Adventures episode.

Doc World: One Child
(READY/WORLD: Sunday, May 21st at 8pm)
Three families struggle to move past the loss of their children.

Painted Nails
(READY/WORLD: Tuesday, May 23rd at 12pm)
Personal story encompasses both the immigrant’s journey and one woman’s rise to activism in the face of adversity.

America Reframed: Breathin’: The Eddie Zhen Story
(READY/WORLD: Tuesday, May 23rd at 6pm)
An intimate portrait of Eddy Zheng on his journey rehabilitation and redemption.

Doc World: Out Run
(READY/WORLD: Sunday, May 28th at 8pm)
The world's only LGBT political party campaigns to elect a transgender woman to the Philippine Congress.

Supper Club, Season 1 (weekly series) May 1st at 9am
Family Ingredients, Season 1 (weekly Series) May 1st at 930am
Pacific Heartbeat - Visions in the Dark: The Life of Pinky Thompson May 1st at 6pm
America Reframed: Cambodian Son May 2nd at 6pm
Stories in Thread May 2nd at 730pm
Cruising the Three Gorges May 3rd at 12pm
Lost Child: Sayon’s Journey May 3rd at 6pm
Journeys in Japan, Season 3 (weekly series) May 5th at 530pm
Quietest Place on Earth May 5th at 7pm
Pacific Heartbeat: Dream Big: Nanakuli at the Fringe May 6th at 10pm
Road to Fame May 6th at 11pm
Pidgin: The Voice of Hawaii May 7th at 2am
Jake Shimabukuro: Life on Four Strings May 7th at 2pm
Doc World: The Killing Fields of Dr. Haing S. Ngor May 7th at 8pm
Our American Family: The Furutas May 7th at 930pm
Ka Hana Kapa May 8th at 2am
Pacific Heartbeat: Ever the Land May 8th at 6pm
Forever Chinatown: Local USA Special May 8th at 7pm
America Reframed: Good Luck Soup May 9th at 6pm
Passing Poston: An American Story May 9th at 7pm
Rudy Maxa’s World: The Taste of Japan May 10th at 12pm
Changing Season: On the Matsumoto Family Farm May 12th at 6pm
Relocation, Arkansas – Aftermath of Incarceration May 12th at 7pm
Global Voices: In the Matter of Cha Jung Hee May 13th at 3am
Canefield Songs: Holehole Bushi May 13th at 430pm
E Haku Inoa: To Weave A Name May 14th at 2am
Doc World: Finding Samuel Lowe May 14th at 8pm
Chinese Couplets May 14th at 2pm
Pacific Heartbeat: Next Goal Wins May 15th at 6pm
POV: Fallen City May 16th at 3am
Story of Yiu May 16th at 12pm
Epic Adventures: Hong Kong May 17th at 12pm
Filipino American Lives - Harana: The Search for the Serenade May 17th at 6pm
Filipino American Lives - Delano Manongs: Forgotten Heroes May 19th at 6pm
Pacific Heartbeat: A Place to Call Home May 19th at 7pm
Off the Menu: Asian American May 20th at 4pm
Kitchen Wisdom, Season 1 (weekly series) May 21st at 1230pm
Doc World: One Child May 21st at 8pm
Global Voices: Here Comes Uncle Joe May 21st at 9pm
Of Race and Reconciliation May 22nd at 6pm
Painted Nails May 23rd at 12pm
America Reframed: Breathin’: The Eddie Zhen Story May 23rd at 6pm
Giap’s Last Day at the Ironing Board Factory May 24th at 6pm
Counting from Infinity: Yitang Zhang and the Twin Prime Conjecture May 25th at 7pm
Telos: The Fantastic World of Eugene Tssui May 27th at 4pm
Doc World: Out Run May 28th at 8pm
America Reframed: The Last Season May 30th at 6pm

Letter from the CEO More common than Parkinson's, but less known: How Tucsonans with aphasia are navigating the pandemic
By posting comments, you agree to our
AZPM encourages comments, but comments that contain profanity, unrelated information, threats, libel, defamatory statements, obscenities, pornography or that violate the law are not allowed. Comments that promote commercial products or services are not allowed. Comments in violation of this policy will be removed. Continued posting of comments that violate this policy will result in the commenter being banned from the site.