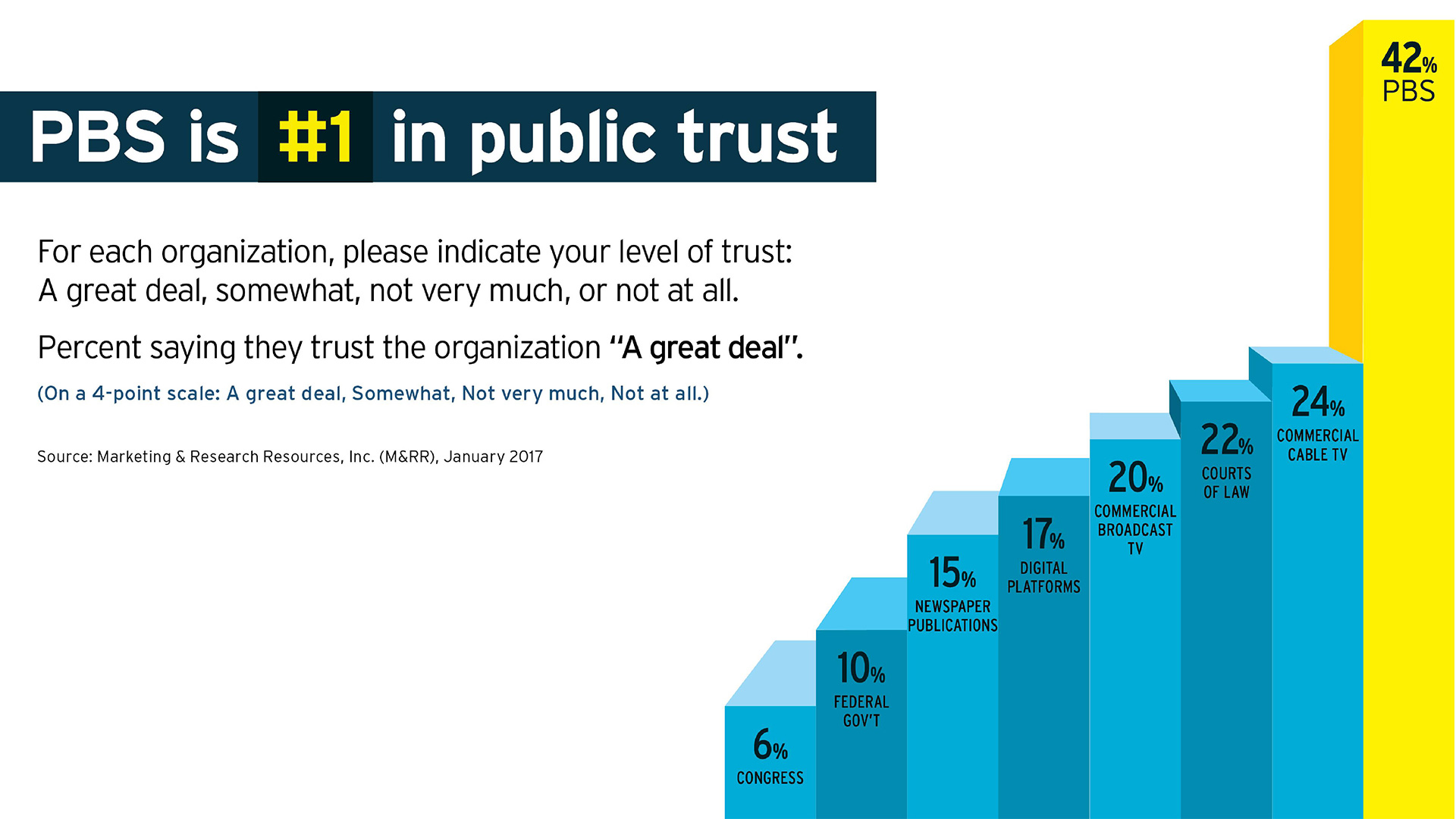 For the 14th consecutive year, a nationwide study recently confirmed that PBS and its member stations are rated #1 in public trust among nationally known institutions. In addition, the same survey found that parents rank PBS KIDS as the #1 educational media brand for children, significantly outscoring cable and commercial broadcast television networks.

The national poll was created by the research team at PBS and was conducted by telephone in January 2017 by Marketing & Research Resources Inc. (M&RR). Each year, PBS commissions research to measure its performance and value as judged by its most important stakeholder – the American people.

“The public’s high trust in PBS and local stations is of paramount importance to our ability to carry out our mission,” said PBS President and CEO Paula Kerger. “We were founded on the premise that every person, regardless of who they are or where they live, should have access to educational programming and resources that help them lead full and enriched lives. Our service begins with our nation’s youngest citizens, ensuring that children have the skills needed to succeed in life and in school, and we are especially proud that the American people continue to place a high value on our children’s programming. The recently launched PBS KIDS 24/7 channel and live stream, available through local member stations, will make a meaningful difference in the lives of all children, anytime and anywhere.”

PBS KIDS
PBS KIDS was ranked #1 as the most educational media brand compared to a range of other broadcast and cable networks.

PBS is America’s largest classroom, biggest stage for the arts and a trusted window to the world.

To learn more about how PBS and local member stations are trusted, valued and essential to communities across the country, visit ValuePBS.org.

Survey Methodology
This survey was developed by PBS and conducted by phone, including landlines and cell phone-only homes within the United States, by Marketing & Research Resources Inc. (M&RR) on behalf of PBS from January 3-10, 2017, among 1,002 adults ages 18 and older. The sample included 484 men and 518 women. Survey results are weighted to be nationally representative of the U.S. adult population.

About PBS
PBS, with nearly 350 member stations, offers all Americans the opportunity to explore new ideas and new worlds through television and digital content. Each month, PBS reaches nearly 100 million people through television and nearly 28 million people online, inviting them to experience the worlds of science, history, nature and public affairs; to hear diverse viewpoints; and to take front row seats to world-class drama and performances. PBS’ broad array of programs has been consistently honored by the industry’s most coveted award competitions. Teachers of children from pre-K through 12th grade turn to PBS for digital content and services that help bring classroom lessons to life. Decades of research confirms that PBS’ premier children’s media service, PBS KIDS, helps children build critical literacy, math and social-emotional skills, enabling them to find success in school and life. Delivered through member stations, PBS KIDS offers high-quality educational content on TV – including a new 24/7 channel, online at pbskids.org, via an array of mobile apps and in communities across America. pbs.org