More than 150,000 people attended the Davis-Monthan Air Force Base open house over the weekend.

But before the crowds gathered on Saturday and Sunday, a special group of people were on the tarmac for their own air show.

Families participating in the Make-a-Wish Arizona, wounded warriors and World War II veterans were given a sneak peak of the show, presented by the Air Force demonstration team: the Thunderbirds.

Among the attendees is David Winsor. He was wounded in WWII and received the Purple Heart. After the war, he came to Tucson, and went on to become the first veteran affairs coordinator at the University of the Arizona.

Winsor stayed at the UA for decades, eventually becoming the dead of admissions.

He has seen air shows before, but he called this one "amazing."

Fellow veteran, Ray Griffith sat nearby. The 92-year-old Army vet graduated from the Military Academy at West Point at a time when the Air Force did not exist, but said his roommate went into the Army Air Corps, so he's followed the planes ever since.

After the special event, pilots from the Thunderbirds met with members of the audience. 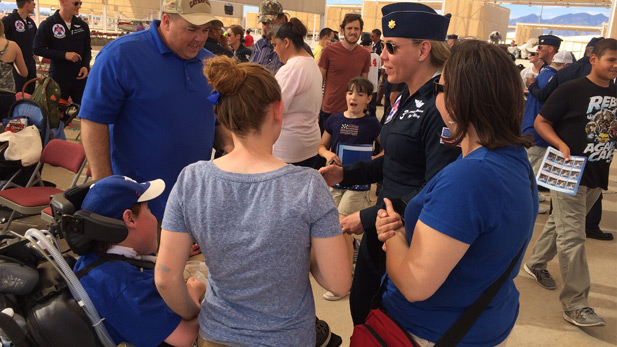 METRO WEEK: Expanded Flight Training to Have Minimal Effect DM Crews Rescue Fishermen Hundreds of Miles Away AZ Week: Barber at Forefront of A-10 Preservation
By posting comments, you agree to our
AZPM encourages comments, but comments that contain profanity, unrelated information, threats, libel, defamatory statements, obscenities, pornography or that violate the law are not allowed. Comments that promote commercial products or services are not allowed. Comments in violation of this policy will be removed. Continued posting of comments that violate this policy will result in the commenter being banned from the site.