Feeding Our Future: Putting Native Foods Back on the Plate

Why did the Tohono O'odham stop eating and growing their Native foods? by Laura Markowitz TWEET SHARE 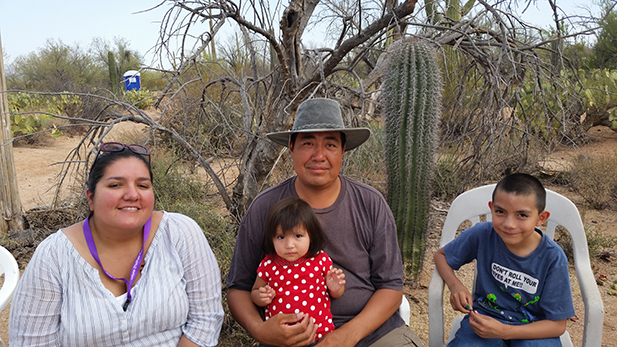 A new generation of Tohono O'odham look to traditional foods to revitalize their connection to culture and promote healthy eating.

Production of Feeding our Future is made possible with the support of the Zuckerman Family Foundation.

The Native people who lived in Southern Arizona for more than 4,000 years grew and wild-harvested everything they needed to survive. But today, the majority of their descendants, the Tohono O’odham, rely on government-sponsored hunger relief programs. A new generation of Tohono O’odham leaders is trying to change that.

Nyona Smith describes herself as “a proud member of the Tohono O’odham Nation” at a guest lecture to the University of Arizona’s Community and School Garden Program class. She took this class a few years ago, when she was an undergraduate. She says if you want to learn about Tohono O’odham culture, learn about their food.

“Tepary beans is the Bau in our language,” says Smith, who is fluent in her language. “The O’odham squash, Hok; Hoon is the O’odham sixty-day corn.” 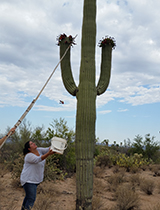 Jennifer Juan stands under the giant cactus and waits to catch the ripe fruit a partner knocks down. They use a long stick made from two saguaro ribs lashed together. (PHOTO: Laura Markowitz)

For millennia, those were the staple crops of the Tohono O’odham – beans, squash and corn. The people farmed and hunted, and they also wild-harvested food. Through songs and stories, the Tohono O’odham transmitted this traditional knowledge to the next generation. That was how elders taught young people how to survive in the desert.

“The way of life is our hemadok,” says Smith. “I’m really thankful and glad to have that knowledge and to practice the ceremonies.”

Many Tohono O’odham of her generation don’t have this traditional knowledge about Native foods. They don’t feel connected to their traditional foods.

“When I was growing up, e I didn’t know like about our traditional wild foods and how to go out and harvest them,” says Samantha Felix. She grew up in a small village on the Nation. She says every once in a while her grandmother would take her out to gather prickly pear cactus fruit, or she’d bring home cholla cactus buds. But Native foods were not a mainstay of her family’s diet.

Unemployment and poverty rates are higher on the Nation compared to the rest of the state. The majority of Tohono O’odham receive commodities – federal hunger relief aid.

Unemployment and poverty rates are higher on the Nation compared to the rest of the state. The majority of Tohono O’odham receive commodities – federal hunger relief aid.

“It’s pretty hard out there on the Nation to get a job,” says Anthony Sweezy. He grew up in the Nation’s San Xavier district. “It’s either you’re working for the government, police department, drug smuggling, or people trafficking, bootlegging.” He says almost everyone he knows needs commodities to get by. 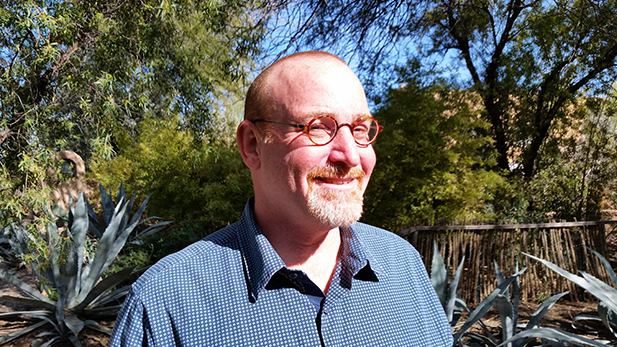 Tristan Reader is co-founder of the Tohono O'odham Community Action (TOCA), a nonprofit that promotes a revival of traditional agriculture on the Nation and also nurtures young leaders.
Laura Markowitz

“The Commodity Assistance Program was well-meaning, says Tristan Reader, an expert on the Tohono O’odham food system. “They saw there was some nutritional insecurity within the community and they thought, ‘Well, let’s help.’ ”

The Commodities program came into Native communities around 1961. Mostly, it was processed foods – canned soups, white bread, cheese, pasta and cereal. The food might have been free, but the Tohono O’odham are still paying a high price for it.

In 1960, no Tohono O’odham had ever had Type 2 Diabetes. Now, more than 60 percent of adults over 35 and children as young as 6 have the disease. Those are the highest rates in the world of any ethnic group.

“In 1960, no Tohono O’odham had ever had Type 2 Diabetes,” Reader says. “Now, more than 60 percent of adults over 35 and children as young as 6 have the disease. Those are the highest rates in the world of any ethnic group. That’s been because of this change in diet.”

Commodities were loaded with fat, sugar and wheat. The Tohono O’odham couldn’t process it – their bodies weren’t used to it. Reader says that’s because their staple foods, like tepary beans, and sixty-day corn, and mesquite flour help regulate blood sugar levels and help prevent diabetes. He says even if the people wanted to return to the diets of their great-grandparents, that food wasn’t available anymore. In the 1930s, the tribe was growing around 20,000 acres of traditional crops. By 2000, only two acres. The Tohono O’odham went from almost 100 percent food self-sufficiency to almost 100 percent food dependency because of commodities.

Commodities undermined the local food system, says Reader. “If someone’s handing out free food you become more dependent on that and there’s less of a reason to produce on your own.”

And there’s also less reason to participate in traditional ceremonies. To get ready for the rain ceremony, for example, the Tohono O’odham spend three weeks harvesting the saguaro cactus fruit. It’s hard work, and it’s hot work out in the desert. The fruit has to be scooped out and boiled down to a syrup, which is then used during a four-day ceremony to call the monsoon rains.

Jennifer Juan and her husband, Anthony Sweezy, are teaching their two young kids about the saguaro fruit harvest, or bahidaj. It’s the Tohono O’odham’s new year. On a July weekend they lead a workshop for the Arizona-Sonora Desert Museum. Juan demonstrates using a long stick made from two saguaro ribs lashed together. One person knocks the fruit off the cactus she stands below and catches it in a bucket. Sweezy says it teaches teamwork, which is something he wants his kids to learn.

Juan scoops out some of the bright-red fruit and dabs a little over her heart. “We like to give thanks for this food,” she explains, “so you’re going to take a little bit and put it over your heart. And then you can eat as much as you want.”

The fruit is as sweet as candy. Sweezy says some Tohono O’odham use it to make wine. He knows a few people who support themselves by harvesting the fruit and selling the syrup.

“In the past, it was three straight weeks, every single family member out there and it was completely tiresome, but you needed to do it for survival,” says Juan. “Nowadays, it’s a way to continue the heritage.”

“In the past, it was three straight weeks, every single family member out there and it was completely tiresome, but you needed to do it for survival,” says Juan. “Nowadays, it’s a way to continue the heritage.”

When she was growing up on the Nation, Juan learned from a nonprofit called TOCA – Tohono O’odham Community Action. Tristan Reader co-founded it 21 years ago. TOCA has been re-popularizing Native foods, and in the process teaching young people the traditional ways to farm, wild-harvest and hunt.

Juan recalls: “One of my cousins, she had a baby when she was very young. And when she was the intern at TOCA they took her out and they taught her how to hunt for rabbits and how to skin it and how to prepare it and she made a stew and came over to our house to give it to my dad. She was like, ‘This is the first time I realized it’s okay and I can provide for my family.’ If you’re able to provide for your own family it’s just that much more that you don’t have to rely on someone else.” 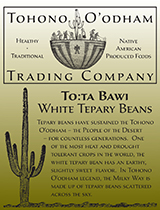 TOCA sells the tepary beans it grows on its farms. (PHOTO: Laura Markowitz)

The Tohono O’odham Nation is the size of Connecticut and it has one supermarket – a Bashas’. It’s in Sells, which is the Nation’s capital. TOCA opened a restaurant right next door. The Desert Rain Café serves traditional foods like tepary bean stew and cholla cactus bud pico de gallo. Reader says TOCA chose the location deliberately.

“Let’s say I’m off of work, it’s 5:30, I need to feed the kids. Do I go to the deli at Bashas’ and get fried chicken and french fries, or do I go to Desert Rain Café and get tepary bean stew? If you don’t have that as an option you know which way you’re going to go.”

Tristan Reader says getting Native foods back on the plate was only one of TOCA’s goals. He and co-founder Terrol Dew Johnson didn’t just want to plant physical seeds – they wanted to seed the nation with young leaders. Reader says former TOCA staff are now teachers on the nation, head up the Nation’s youth division and even serve on the tribal council.

And then there’s Jennifer Juan. She’s on TOCA’s board of directors and she also works for the Nation’s Cultural Center and Museum. She and Sweezy want their kids to connect to their culture and food. She is excited that TOCA has gotten Native foods on the school cafeteria menu in Baboquivari Unified School District. Her son, Daniel, is 8 and goes to Indian Oasis Elementary in Sells. He says he doesn’t like tepary beans.

“It doesn’t have the same flare as pizza or chicken nuggets,” says Juan.

Vegetables in general are a hard sell for kids, but Daniel’s parents say the more Native foods are offered to Daniel, the more likely he will be to try them. They believe it’s important not just for his health, but for his sense of identity as Tohono O’odham.

There are no traditional songs for chicken nuggets, but there are songs and legends about tepary beans.

There are no traditional songs for chicken nuggets, but there are songs and legends about tepary beans. They hope when Daniel looks up at the night sky he’ll think of coyote scattering white tepary beans to create the milky way. They hope one day Daniel will tell his children those stories, and take them into the garden, and teach them how to grow. 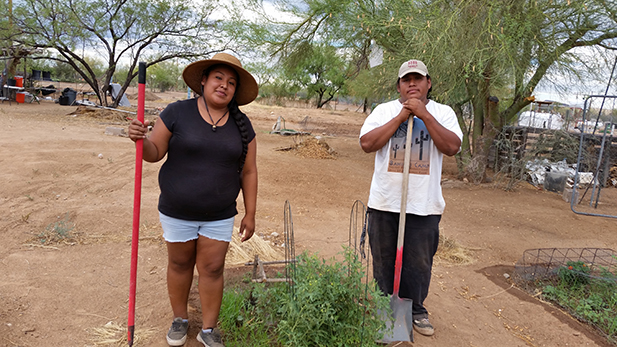 Feeding Our Future: Growing Community in Tucson’s Barrios Tohono O'odham Leaders Hope to Get Youth to Vote Early Feeding Our Future: Harvesting the Desert
By posting comments, you agree to our
AZPM encourages comments, but comments that contain profanity, unrelated information, threats, libel, defamatory statements, obscenities, pornography or that violate the law are not allowed. Comments that promote commercial products or services are not allowed. Comments in violation of this policy will be removed. Continued posting of comments that violate this policy will result in the commenter being banned from the site.