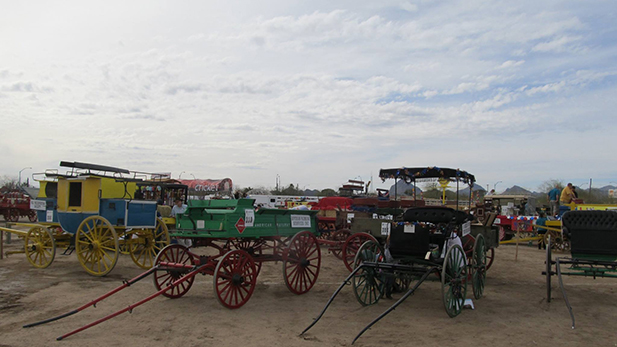 The Tucson Rodeo Parade dates back to 1925, and since then, the organizing committee has amassed a collection of horse-drawn vehicles. They’re on display at the Rodeo Parade Museum.

Several of the collection's fringe-top surreys appeared in the movie version of the Rodgers and Hammerstein musical “Oklahoma!”, which wasn’t filmed in Oklahoma, but right here in Southern Arizona.

The museum also features remakes of what Tucson looked like in the year 1900, one of the first airport hangars in the country and antique miniature railroads.

The museum is located in the rodeo grounds. It’s open from 9.30 a.m. until 3.30 p.m. Monday through Saturday until April 8th.

Pull on Your Boots: It's Rodeo Time in Tucson Sonoita's 'Best Little Rodeo in Arizona' Turns 101 This Weekend 'Fine Bunch of Cowboys' Compete at Tucson Rodeo
By posting comments, you agree to our
AZPM encourages comments, but comments that contain profanity, unrelated information, threats, libel, defamatory statements, obscenities, pornography or that violate the law are not allowed. Comments that promote commercial products or services are not allowed. Comments in violation of this policy will be removed. Continued posting of comments that violate this policy will result in the commenter being banned from the site.