Bell rings with lists of names of dead and wounded, which included then-Congresswoman Gabrielle Giffords. by Steve Jess TWEET SHARE 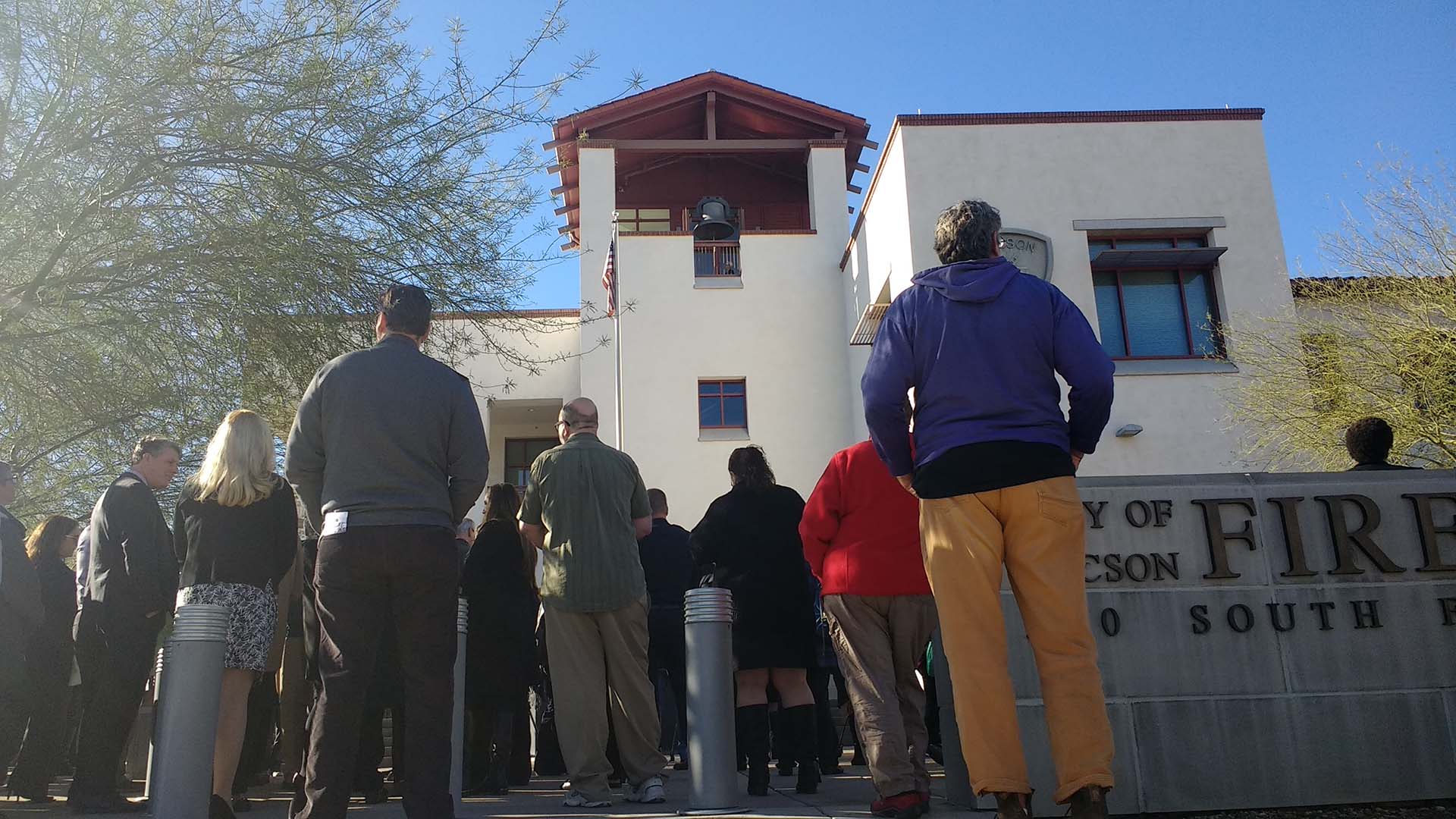 People gather outside Tucson Fire Central under the tower holding the historic fire department bell on January 8, 2019. The city commemorated the eighth anniversary of the 2011 mass shooting that claimed six lives and left 13 people wounded.

About 100 people gathered on the plaza in front of Tucson's main fire station Tuesday morning to remember an event that shattered the Tucson community and shook the whole country.

Barber then read the names of the 13 people wounded on that day, including himself, and his boss, Giffords. It was the first time Barber was the one to read the names for this annual commemoration.

"The injury, the memory never goes away. Today my wife and I, our texts and the emails were filled with people from all over the country wishing me, us, well. So we do know that this resonates. This anniversary does resonate to a lot of people, because it really was the first mass shooting of significance, particularly because a federal judge was killed and, of course, Congresswoman Giffords was almost killed," Barber said.

The event drew a small crowd, including many people who were in Tucson on the day it happened. One of the younger people in attendance was Alexa Johnson.

"I'm a mentor at a high school in Oro Valley, and one of the girls that I know was connected to I think Christina-Taylor Green, so it was cool to be able to be here and hear her name be called in like respect her and remember her." Johnson said.

Nine-year-old Christina-Taylor Green was the youngest person killed on that awful day. For Ron Barber, who was elected to Congress after Giffords' resignation, Tuesday marked the closing of a circle. He is now back in the position he held in 2011, as a district director for a member of Congress, this time working for Ann Kirkpatrick, who was elected to Giffords' old seat in November.

Giffords herself was in Washington on Tuesday, marking the day with the introduction of a bill calling for universal background checks for gun buyers.

"This anniversary does resonate to a lot of people, because it really was the first mass shooting of significance, particularly because a federal judge was killed and, of course, Congresswoman Giffords was almost killed" — former Congressman Ron Barber

"It's been a long time coming. I mean, it's a very small but important step towards preventing or reducing gun violence in our country, so in that sense that bill being dropped is a commemoration that we've all been waiting for. and it's going to be called House Resolution 8 in memory of the day that tragedy took place," Barber said.

Tuesday's event is expected to be the last one held at the main fire station. Next year organizers hope to have a memorial in place near the old Pima County courthouse to honor the victims of the shooting, and those who rendered aid to the wounded.

Tucson advocates say there's still time to push for police defunding in city budget What Americans need to talk about. 'We are nowhere near having this under control,' UA epidemiologist says
By posting comments, you agree to our
AZPM encourages comments, but comments that contain profanity, unrelated information, threats, libel, defamatory statements, obscenities, pornography or that violate the law are not allowed. Comments that promote commercial products or services are not allowed. Comments in violation of this policy will be removed. Continued posting of comments that violate this policy will result in the commenter being banned from the site.