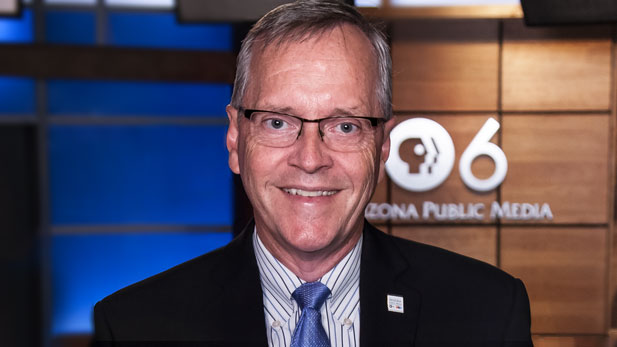 Jack Gibson’s award-winning career in public broadcasting spans more than thirty years and demonstrates the ideals of using media as a resource to educate, inform and inspire audiences.

He has developed a number of successful production projects earning him numerous accolades, including seven Emmy® Awards.

Gibson is the director and general manager of Arizona Public Media (AZPM), the broadcast and production resource of the University of Arizona in Tucson. For more than 50 years this non-profit public media enterprise has captured the imagination of viewers and listeners young and old with a wide variety of high-quality programming from the Public Broadcasting Service (PBS) and National Public Radio (NPR), in addition to its own original productions, which have consistently been recognized in prestigious award competitions.

AZPM is headquartered on the campus of the University of Arizona and features three television channels and three radio channels delivered via broadcast, cable, satellite, and online at azpm.org. Gibson was instrumental in re-branding Tucson’s public broadcasting entities under the moniker Arizona Public Media to better represent traditional media platforms integration with new digital technologies.

Gibson began his career in 1979 and has held leadership positions at WUFT/Gainesville, the PBS and NPR affiliates of the University of Florida, WLIW/New York, and most recently WPBT/Miami as their senior vice president for programming & production. In January 2006, he was recruited to join the University of Arizona as the CEO of its public media organization.

Gibson has served on numerous industry and community Boards and Committees, including four terms as a Governor for the National Academy of Television Arts and Sciences, Suncoast Chapter. He currently serves on the Board of Directors for the Children’s Action Alliance and Arizona Town Hall in Phoenix, is the Treasurer of the Pacific Mountain Network (Colorado) and is the past Chair of the Nature, Arts, Culture, and Heritage Organization (NACHO), in Tucson.

Jack resides with his wife Laura, a kindergarten teacher at Canyon View Elementary School, in the Catalina Foothills. They have three grown children.