Hundreds gather at University of Arizona to dedicate site honoring those who died at Pearl Harbor. by Christopher Conover TWEET SHARE 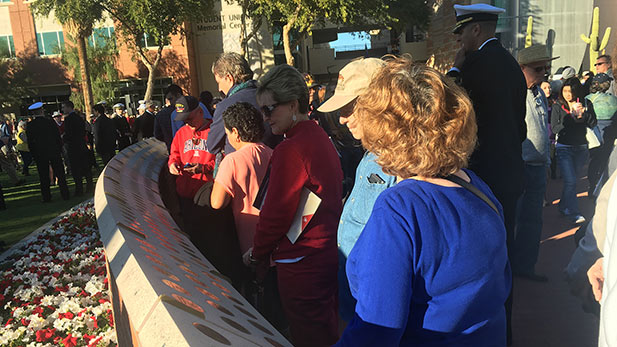 People walk through the USS Arizona Memorial to look at the medallions for those who died on the ship. The memorial is on the campus of the University of Arizona. December 4, 2016
Christopher Conover, AZPM

The 47th Fighter Wing is more than just a unit based in Tucson. On Dec. 7, 1941, the 47th was based on Oahu, Hawaii. Pilots from the 47th shot down eight Japanese fighter planes during the attack on Pearl Harbor.

The memorial on the UA mall features a full-size outline of the USS Arizona and medallions featuring the name of each of the 1,117 people killed on the ship during the attack, 75 years ago this week.

“Think of the thousands of stories that will never be told, the letters home never finished, the deck watches never turned over, the homecomings never enjoyed,” said Stephen Evans, a Navy rear admiral who spoke at the ceremony.

Eight of the names on the memorial are men from Arizona who died on the ship. Only one man, James Van Horne, was from Tucson.

The bell from the USS Arizona is in the University of Arizona Student Union Memorial Center. It tolled as the name of each of the eight Arizona sailors was read during the ceremony.

Hundreds of people gathered on the University of Arizona mall to watch the dedication and then walk through the memorial. 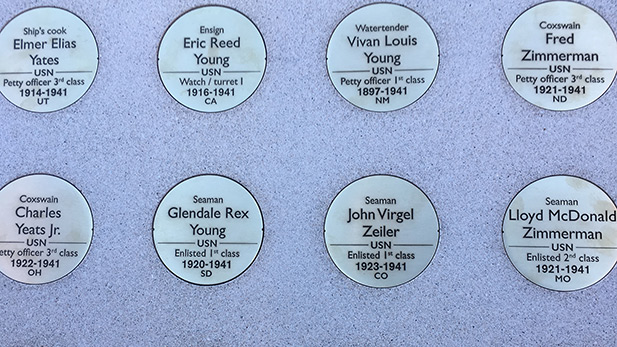 Medallions at the USS Arizona Memorial feature the names of the 1,117 people who died on the Arizona during the attack on Pearl Harbor. December 4, 2016
Christopher Conover, AZPM

“I think the memorial is beautiful. I thought the ceremony was really lovely,” said Tamara Moore Jones.

Jane Prescott-Smith from University Libraries helped plan the details for the dedication ceremony. She said she hopes students who walk past the memorial stop to reflect on the sacrifices made by people who came before them.

“I hope that as they cross from one side to the other that they’ll see some of the dates on those medallions and realize just how young the men were who lost their lives,” Prescott-Smith said. University students and visitors can also see the Arizona’s anchor chains and other artifacts on exhibit in the Student Memorial Union.

The UA library also has an exhibit on the USS Arizona in Special Collections through Dec. 23.

Air National Guard Jets To Honor Fallen Soldiers on Memorial Day 75 Years Later, USS Arizona Sailor Recalls Attack on Pearl Harbor Remembering USS Arizona and Pearl Harbor, 74 Years Later
By posting comments, you agree to our
AZPM encourages comments, but comments that contain profanity, unrelated information, threats, libel, defamatory statements, obscenities, pornography or that violate the law are not allowed. Comments that promote commercial products or services are not allowed. Comments in violation of this policy will be removed. Continued posting of comments that violate this policy will result in the commenter being banned from the site.